The Internal Revenue Service today urged taxpayers to resolve their significant tax debts to avoid putting their passports in jeopardy. They should contact the IRS now to avoid delays in their travel plans later.

Under the Fixing America’s Surface Transportation (FAST) Act, the IRS notifies the State Department (State) of taxpayers certified as owing a seriously delinquent tax debt, which is currently $52,000 or more. The law then requires State to deny their passport application or renewal. If a taxpayer currently has a valid passport, State may revoke the passport or limit a taxpayer’s ability to travel outside the United States.

When the IRS certifies a taxpayer to State as owning a seriously delinquent tax debt, the taxpayer receives a Notice CP508C from the IRS. The notice explains what steps the taxpayer needs to take to resolve the debt. IRS telephone assistance can help taxpayers resolve the debt. For example, they can help taxpayers set up a payment plan or make them aware of other payment options. Taxpayers should not delay because some resolutions take longer than others.

It’s especially important for taxpayers with imminent travel plans who have had their passport applications denied by State to call the IRS promptly. The IRS can help taxpayers resolve their tax issues and expedite reversal of their certification to State. When expedited, the IRS can generally shorten the 30 days processing time by 14 to 21 days. For expedited reversal of their certification, taxpayers will need to inform the IRS that they have travel scheduled within 45 days or that they live abroad.

For expedited treatment, taxpayers must provide the following documents to the IRS:

Before contacting State about revoking a taxpayer’s passport, the IRS will send Letter 6152, Notice of Intent to Request U.S. Department of State Revoke Your Passport, to the taxpayer to let them know what the IRS intends to do and give them another opportunity to resolve their debts . Taxpayers must call the IRS within 30 days from the date of the letter. Generally, the IRS will not recommend revoking a taxpayer’s passport if the taxpayer is making a good-faith attempt to resolve their tax debts.

There are several ways taxpayers can avoid having the IRS notify State of their seriously delinquent tax debt. They include the following:

Frequently, taxpayers qualify for one of several relief programs including the following:

Subject to change, the IRS also will not certify a taxpayer as owing a seriously delinquent tax debt or will reverse the certification for a taxpayer:

For taxpayers serving in a combat zone who owe a seriously delinquent tax debt, the IRS postpones notifying the State Department of the delinquency and the taxpayer’s passport is not subject to denial during the time of service in a combat zone. 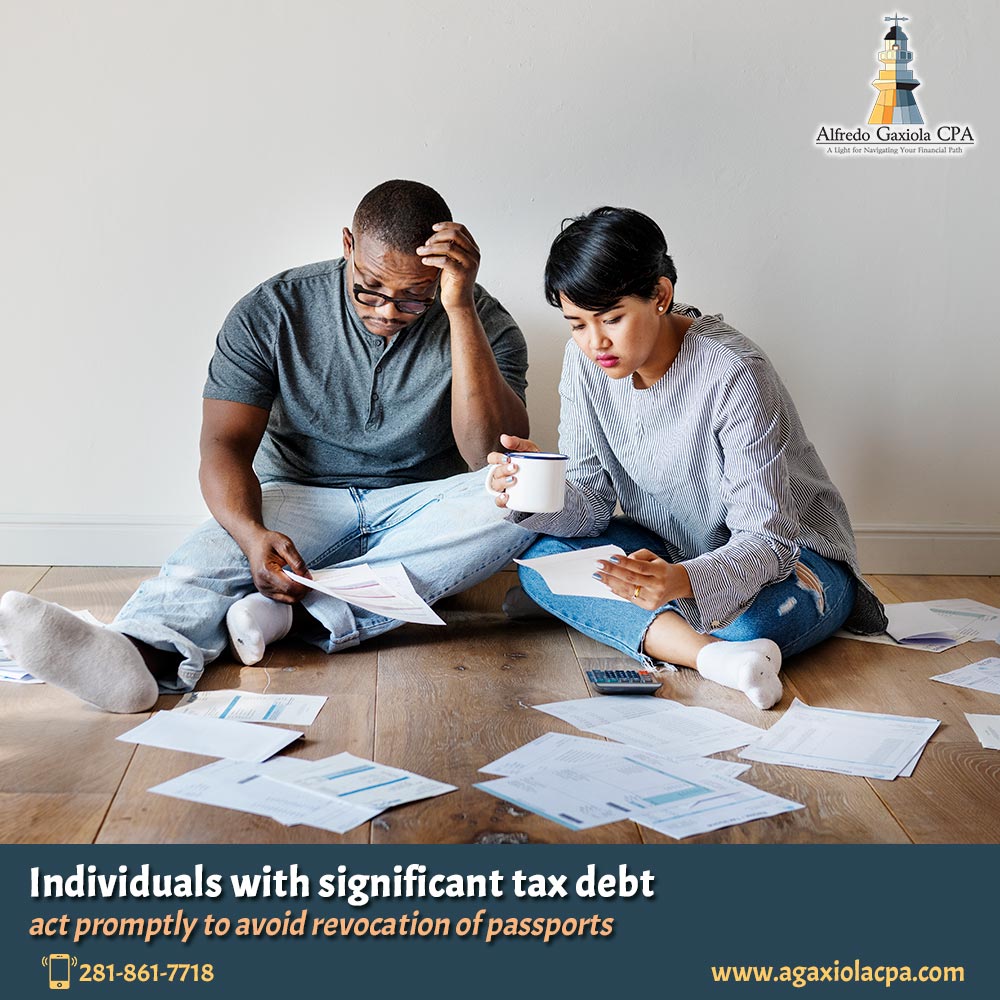