The Internal Revenue Service today reminded taxpayers living and working outside of the United States that they must file their 2020 federal income tax return by Tuesday, June 15. This deadline applies to both U.S. citizens and resident aliens abroad, including those with dual citizenship.

Just as most taxpayers in the United States are required to timely file their tax returns with the IRS, those living and working in another country are also required to file. An automatic two-month deadline extension is normally granted for those overseas and in 2021 that date is still June 15 even though the normal income tax filing deadline was extended a month from April 15 to May 17.

An income tax filing requirement generally applies even if a taxpayer qualifies for tax benefits, such as the Foreign Earned Income Exclusion or the Foreign Tax Credit, which substantially reduce or eliminate U.S. tax liability. These tax benefits are only available if an eligible taxpayer files a U.S. income tax return.

A taxpayer qualifies for the special June 15 filing deadline if both their tax home and abode are outside the United States and Puerto Rico. Those serving in the military outside the U.S. and Puerto Rico on the regular due date of their tax return also qualify for the extension to June 15. IRS recommends attaching a statement if one of these two situations apply.

Federal law requires U.S. citizens and resident aliens to report any worldwide income, including income from foreign trusts and foreign bank and securities accounts. In most cases, affected taxpayers need to complete and attach Schedule B to their tax return. Part III of Schedule B asks about the existence of foreign accounts, such as bank and securities accounts, and usually requires U.S. citizens to report the country in which each account is located.

In addition, certain taxpayers may also have to complete and attach to their return Form 8938, Statement of Foreign Financial Assets. Generally, U.S. citizens, resident aliens and certain nonresident aliens must report specified foreign financial assets on this form if the aggregate value of those assets exceeds certain thresholds. See the instructions for this form for details.

Separate from reporting specified foreign financial assets on their tax return, taxpayers with an interest in, or signature or other authority over foreign financial accounts whose aggregate value exceeded $10,000 at any time during 2020, must file electronically with the Treasury Department a Financial Crimes Enforcement Network (FinCEN) Form 114, Report of Foreign Bank and Financial Accounts (FBAR). Because of this threshold, the IRS encourages taxpayers with foreign assets, even relatively small ones, to check if this filing requirement applies to them. The form is only available through the BSA E-filing System website.

The deadline for filing the annual Report of Foreign Bank and Financial Accounts (FBAR) was April 15, 2021, but FinCEN is granting filers who missed the original deadline an automatic extension until October 15, 2021, to file the FBAR. There is no need to request this extension.

Any income received or deductible expenses paid in foreign currency must be reported on a U.S. tax return in U.S. dollars. Likewise, any tax payments must be made in U.S. dollars.

Both FINCEN Form 114 and IRS Form 8938 require the use of a December 31 exchange rate for all transactions, regardless of the actual exchange rate on the date of the transaction. Generally, the IRS accepts any posted exchange rate that is used consistently. For more information on exchange rates, see Foreign Currency and Currency Exchange Rates.

Taxpayers who relinquished their U.S. citizenship or ceased to be lawful permanent residents of the United States during 2020 must file a dual-status alien tax return, and attach Form 8854, Initial and Annual Expatriation Statement. A copy of Form 8854 must also be filed with Internal Revenue Service, 3651 S IH35 MS 4301AUSC, Austin, TX 78741, by the due date of the tax return (including extensions). See the instructions for this form and Notice 2009-85 PDF, Guidance for Expatriates Under Section 877A, for further details.

Extra time is available for those who cannot meet the June 15 date. Individual taxpayers who need additional time to file can request a filing extension to Oct. 15 by printing and mailing Form 4868, Application for Automatic Extension of Time To File U.S. Individual Income Tax Return. The IRS can't process extension requests filed electronically after May 17, 2021. Find out where to mail the form.

Members of the military qualify for an additional extension of at least 180 days to file and pay taxes if either of the following situations apply:

Spouses of individuals who served in a combat zone or contingency operation are generally entitled to the same deadline extensions with some exceptions. Extension details and more military tax information is available in IRS Publication 3, Armed Forces' Tax Guide. 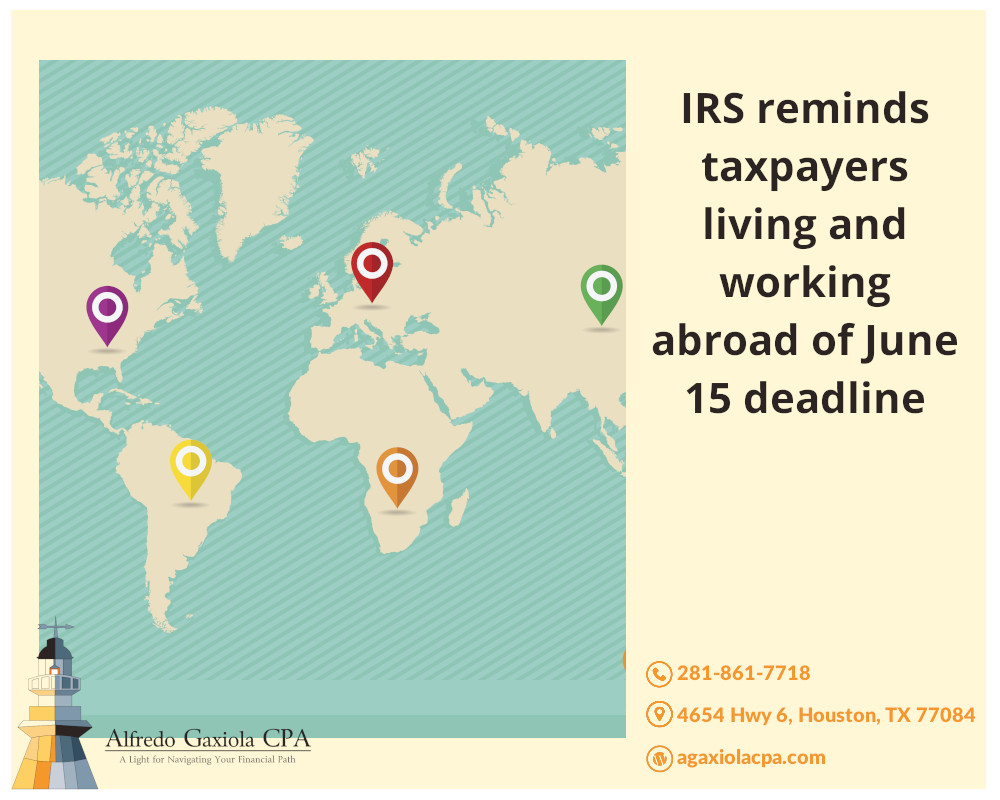